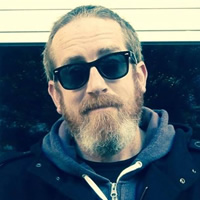 Born in Western Australia, Scott worked as a journalist and magazine editor for eight years before deciding to pursue new adventures abroad. After falling in love with Munich (and a local girl) he relocated permanently to enjoy everything this great city has to offer. When not sharing his love of Bavaria with visitors, Scott devotes his spare time to creative art, travel and learning more about European history.

Scott is not content with just being your average guide, he is also here to be your friend InMunich, to show you all the sights, sounds and pleasures this magnificent city has to offer!

Of all the reviews Scott has had in the last 7 years all over the internet, these sum up not only his professional approach to some very difficult history, but his passion for Germany today.


Dachau Tour with Scott
...This was such an amazing, yet chilling tour. Scott was just fantastic!! He was very knowledgeable and gave us so much detailed information. It really was an amazing tour and one that everyone should do!! It really puts things into a greater perspective now that we're doing more travelling to some neighbouring countries. A must do tour!
Review by ChrisBarney07 / TripAdvisor

Scott was utterly fantastisch
What an amazing tour of the city, in spite of the crowds pouring in for Oktoberfest! Scott was hilarious from the outset, and had an enormous wealth of knowledge on every conceivable historical period we quizzed him on - he was particularly helpful in demonstrating how the history of Munich doesn't revolve entirely around beer (well, not always!) Would 100% recommend to all ages.
Review by soppy02 / TripAdvisor

Very informative tour of Dachau
Scott was a great tour guide. We really left feeling we had gained so much more from our visit to the memorial, than we would have without him. He really knew what he was talking about, and has inspired my partner and I to do more of our own research into the topic!
Review by Ashleigh B / TripAdvisor

Free Walking Tour / Dachau
Oh Scott, your champagne comedy was delightful. Watching the drama unfold on the glockenspiel with Scott's commentary was one of the highlights of our trip to Munich. Taking the Free Walking Tour of the Marienplatz area was the best way to introduce us to the city. We saw most of the recommended sights but with a lot more insight than if we had ventured out on our own. It was a well paced jaunt that ended just in time for lunch at the beer garden. We enjoyed the tour so much, we went with the same outfit for a tour of the concentration camp at Dachau. Scott was also our guide to the concentration camp. Going with a guide is the only way to get a full comprehensive experience in one day. There's so much information at the memorial, that it would be impossible to take it all in on one trip. And Scott relayed the lessons of the place with all the respect and solemnity that the memorial deserves. The concentration camp broke my heart, but it's something that everyone needs to experience to ensure that such atrocities never happen again.
Review by The_Serg / TripAdvisor

Bringing History Alive
...Scott was very knowledgable about the subject and made the displays come alive. He was a good tour guide...the pace considered all members of the group. As a native English speaker with a german wife, he was easy to understand yet presented an unbiased picture of both the past and present of Germany. There was a little free time to explore the more unsettling areas of Dachau on your own....this allowed people on the tour to absorb these aspects at their own pace. I was concerned about taking a group tour to such a sensitive site, but InMunich Tours / Scott did a great job.
Review by Kay G / TripAdvisor