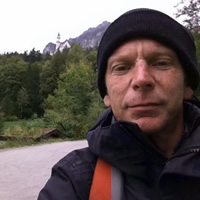 Hein was born in South Africa, on the northern border with Zimbabwe, on a farm. After spending some time in the army, he later started working in the Film Industry and settled down in Cape Town. During one of the film productions, he met a German lady working on the same film. But after the film production was finished, they lost contact until 3 years later, when Facebook brought them together again. He fell in love with her, visited Munich a few times, and after seeing and experiencing the lovely city, decided to move here. They married in 2012 and a year later settled in Munich. When he is not sharing his love for the city with fellow foreigners on tour, he spends his time studying the German language.

Hein is not content with just being your average guide, he is also here to be your friend InMunich, to show you all the sights, sounds and pleasures this magnificent city has to offer!

Of all the reviews Hein has had in the last 6 years all over the internet, these sum up not only his professional approach to some very difficult history, but his passion for Germany today.


Free city tour
I took the city tour with Hein and it was great! Such a great way to orientate yourself to the city whilst learning about the history behind it all. I would suggest starting your trip in Munich with this tour as it gives you an opportunity to decide which attractions you wish to revisit in more depth at a later stage. Thanks!
Review by Aimee F / TripAdvisor

Amazing walking tour with Hein
My girlfriend and I did the walking tour with Hein as our guide. It was the best free walking tour we've had so far on our Euro-trip. Not only was the tour full of interesting facts and information about the city, there were also lot's of amusing anecdotal tales and local legends.
Review by Matthew T / TripAdvisor

Perfect Introduction to Munich
The 3 hour walking tour should be the first thing you do when visiting Munich. Our guide was Hein and his tour was very informative, captivating, and funny. He seems like a natural storyteller. We had 24 people in our group, but he was able to speak loud enough and maneuver our giant herd around a crowded city. He also gave us a couple of recommendations on the best beer halls to eat in and what to order to get a more local experience. Hein's tour was one of the highlights of our trip!
Review by EHMH / TripAdvisor

Excellent Walking Tour!
My bestie and I went for weekend to Munich and thought a walking tour would be a great way to find our feet in the lovely city - and we weren't disappointed! Our tour guide Hein was funny, informative and very interesting. We learnt so much, and some of it we remembered after a stein or two at the hofbrauhaus! Particular highlights included the less salubrious history of the hofbrauhaus, the past kings and the story of the monkey and the boar. I can't recommend Hein and these tours enough! :-)
Review by Sarah A / TripAdvisor

Great Way to Explore the City!
...My guide Hein was incredible and his knowledge of Bavarian culture and history was super impressive. He made learning a comprehensive history of Munich and the region fun. He was not only knowledgeable about World War II as one would expect but also about medieval times, the Austro-Hungarian Empire, religion in the territory, and most importantly when talking about Germany - beer.
Review by wocomule / TripAdvisor